One of the biggest problems engineers have, is just trying to get people to accept the truth however after decades of drip feeding and illusion trying to change mindsets is nigh on impossible.

You can always go somewhere else that may be cheaper, but we provide a full assurance and guarantee that our work is fully compliant with all the required standards and regulations.

Had an interesting conversation the other day with a highly qualified psychiatrist friend, yes, I do know people outside my industry, and it helps 😉, especially in this industry.

One of the biggest problems engineers have, is just trying to get people to accept the truth however after decades of drip feeding and illusion trying to change mindsets is nigh on impossible.

Engineers work on the facts first and their minds work on the basis that once you can prove the facts and establish them you can then form an informed opinion.

Cognitive psychology and neuroscience studies apparently find the complete opposite is often true!

People form opinions based on fear, emotion, anger, and content, rather than relying on facts. The fact that you can prove it often does not change people’s mindset, which to an engineer is very frustrating, as the laws of physics tend to be fundamental.

It is exceptionally hard to change somebody’s mindset and behaviour even with new information that can categorically prove you’re correct, people really do not like being proven wrong, but then again most engineers I speak to really cannot understand how people think ice cream will hold up a bridge just because the Internet says so. (Flippancy before anybody gets annoyed).

Your beliefs are formed by the things you see and hear from the moment you are born the media, and the Internet, all have a place in forming these opinions together with your schools and the environment you grow up in and the friends you make they get reinforced over time by the social groups that you keep at school in your social life and even how your brain perceives things and your interactions with the world, and the way the world interacts with you.

The old saying of your perception of the world is the reality you tend to see and receive is a very true statement.

Believe me, they are opinions, some started out based on real facts like the old Chinese whisper game changed after each evolution into something people now believe; it’s true!

As he explained to me cognitive bias can kick in very easily when evidence contrary to your beliefs is presented, instead of re-evaluating new evidence you believed up to now, people tend to reject incompatible evidence i.e., evidence that does not fit what you already know, I’ve been guilty of this in the past, so I have no doubt, I will still do it in the future and I try to learn even if it makes me very uncomfortable.

There is an old saying the expansion of one moment is the limitation of the next I believe this came out of the 60s an era I remember well.

After confronting facts that don’t line up with your viewpoint these often backfire and end up strengthening your original beliefs.

As he explained to me there is another cognitive bias which gets in the way of changing your mind it’s called confirmation bias, which is the tendency to seek out information or interpret things in a way that supports your existing beliefs.

So, if you believe that inspecting then testing an electrical circuit can be done for £3 to 10 pounds per circuit trying to convince you otherwise is like trying to paddle up Niagara Falls without a paddle no matter how hard you try you are fighting a losing battle, changing mindsets is exceptionally hard.

As engineers, we have a duty to try and inform people of the facts, as a member of the engineering Council I signed up to and accepted the principles to guide engineering professionals.

This is direct from their site: – 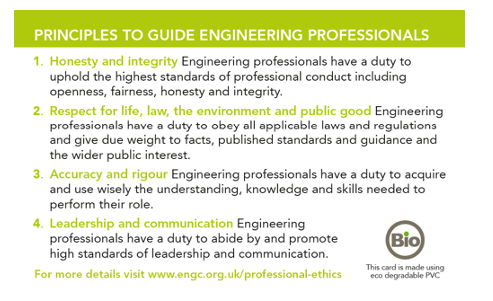 Yet I see so many people selling an illusion that cannot be done safely for the costs stated and the only way it can be achieved is to cut corners and reduce safety this to me is just not acceptable! to me, it is morally unethical.

We are better than this, if you come to me or any other competent engineer, we will not tell you what you want to hear, we will however tell you what you need to hear the problem is having an open mindset to receive this information when for decades you have been told the complete opposite, and everywhere you look it reaffirms your opinion.

If you want to hear the truth so you can have a competent informed opinion, please give us a call or seek out other properly competent engineers to carry out this life safety work.

I’m not the only decent engineer out there the problem is we are becoming a rare breed, so when you find us hang on and use us before we disappear, so many of us have left the industry because they cannot and will not compete with the Cowboys as we do the job properly and because I have personal integrity!

Check out our article here – https://issuu.com/hamervillemediagroup/docs/peoctober2022/19?fr=sYWIxYTU0Mjg1NzM