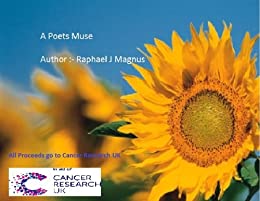 I woke up this morning, apart from it being my birthday, (7/9/58) and realising so many others in my life are no longer here, and that I was lucky to have the love and support of my family and friends around me.However, running around my head was another crazy thought, for those of you that know me, that’s not unusual.

If those 1000 friends sent it out to 10 more friends, and asked them to buy it, then that would be 10,000 people supporting Cancer research. (Step3)

If that 100,000, sent it to 10 more friends and ask them to buy it, that would be 1 million people supporting Cancer research. (Step Five)

Five steps! Is all it would take if everybody that everyone spoke to went to (http://tinyurl.com/8ecxelk), and bought this book we could raise nearly £1 million in just five steps!

On our own, we are like tiny grains of sand, being pushed around by the might of the ocean, but together we are so much stronger.

Such a difference could be made for (less than the price of a cup of coffee at your favourite vendor).

All it would take is a little effort, amazing, when joined by so many others, we can all make a difference, and it starts by taking that first step!

I hope you will join me, in making a difference to the world around us, maybe it will be us that with our very small individual effort causes finally; the next breakthrough that could save millions of lives in our world, it is so little yet so much when we join together. 🙂

£2.52p, is all it costs, minus kindles cost of publishing, the VAT man, and the Taxman, it doesn’t leave very much, that’s why all of the proceeds are being donated, the rest is taken by others, but still enough to make a huge difference in just five steps.

A Poets Muse
tinyurl.com
A Poets Muse, Authors Notes: – This book has been put together with the help of my friends; it is dedicated to my Parents whom I sadly lost in the past few years to Cancer. Consequently part of the proceeds are, being donated to Cancer Research with their full Permission.

This website uses cookies to improve your experience while you navigate through the website. Out of these cookies, the cookies that are categorized as necessary are stored on your browser as they are essential for the working of basic functionalities of the website. We also use third-party cookies that help us analyze and understand how you use this website. These cookies will be stored in your browser only with your consent. You also have the option to opt-out of these cookies. But opting out of some of these cookies may have an effect on your browsing experience.
Necessary Always Enabled
Necessary cookies are absolutely essential for the website to function properly. This category only includes cookies that ensures basic functionalities and security features of the website. These cookies do not store any personal information.
Non-necessary
Any cookies that may not be particularly necessary for the website to function and is used specifically to collect user personal data via analytics, ads, other embedded contents are termed as non-necessary cookies. It is mandatory to procure user consent prior to running these cookies on your website.
SAVE & ACCEPT

This website uses cookies so that we can provide you with the best user experience possible. Cookie information is stored in your browser and performs functions such as recognising you when you return to our website and helping our team to understand which sections of the website you find most interesting and useful.

Strictly Necessary Cookie should be enabled at all times so that we can save your preferences for cookie settings.

If you disable this cookie, we will not be able to save your preferences. This means that every time you visit this website you will need to enable or disable cookies again.